Key facts about this geosite:
• The area shows an expanse of large, long-lived active and stabilised dunes
• One of the most extensive aeolian landform assemblages in Tasmania
• Some dunes are at least 30 m high

Geosite Description: The area to the south of the Henty River encompasses an expanse of large, long-lived active and stabilised dune sands.  Abundant palaeosols (old, buried soil horizons) occur in deflation hollows (Manchester, 2010). The dunes are both mobile and vegetated. These sand dunes formed from the Pleistocene to the present (Holocene period). Older dunes are dated and formed approximately 500,000 years ago. This area is one of the three or four most extensive aeolian landform assemblages in Tasmania.

Some dunes are at least 30 m high, and although parabolic in gross shape, in detail a number of parabolic blowouts and a few longitudinal dunes also occur. Orientation of individual blowouts is variable, probably reflecting variable wind patterns (Baillie and Corbett, 1985).

South of the Henty River, the mobile dunes are actively encroaching on a series of older, stable, dissected parabolic dunes which extend nearly to Strahan (Baillie and Corbett, 1985). Active erosion of the dunes is visible along ocean beach. 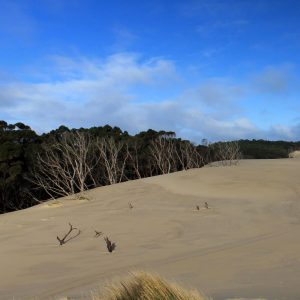