Geosite Description: This site has a dramatic view over the original Iron Blow Open Cut and down the Linda Valley to the east, and also north to some of the other Mt Lyell mines (there were 22 separate ore bodies over 6 km). The original Iron Blow was a large projecting outcrop of hard ironstone discovered by prospectors in the early 1880’s, and worked unsuccessfully for gold. Canny mining investors from Melbourne recognised the copper potential of the concealed ore body near the Blow, and bought the failed gold mine in 1891. Thus began a world-famous copper mine which has continued for over 120 years.

The open pit and its underground extension were mined out in 30 years, as other mines opened up to the north. The waste rock removed from around the ore body forms the large brown spoil heaps just to the north. 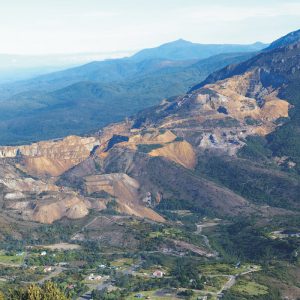