Key facts about this geosite:
• The ridge-line which extends to the east from Mt Jukes shows a glacially carved moraine ridge made up of Owen Conglomerate boulders
• The area shows outcrops of the Mt Read volcanics
• The skyline to the east shows jagged peaks (including Frenchmans Cap) which are made up of resistive, Precambrian quartzite
• The general location of the Darwin Crater, a meteorite impact feature is to the south east of this site

Geosite Description: From the Mt Jukes Lookout there are extensive views towards Frenchmans Cap in the east and Mt Jukes to the south.

The rocks behind the site, on Mt Jukes and West Jukes Peak, comprise a sequence of pink coloured conglomerate, sandstone and siltstone, which geologists have named the Owen Conglomerate. The pebbles which make up the conglomerate include quartz, quartzite, quartz sandstone, pale pink mudstone and chert, embedded in a matrix of sand. They were deposited in the Late Cambrian to Early Ordovician periods. Boulders, sand and silt were eroded, mainly from older Precambrian rocks to the east, and deposited in alluvial fans, deltas and in shallow marine environments. The conglomerate was derived from the highlands of the uplifted Tyennan Block and is up to 1500 meters thick. 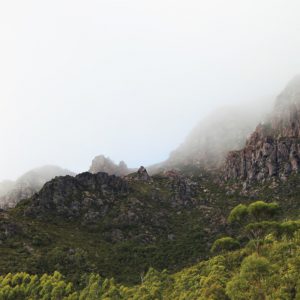