Key facts about this geosite:
• The area contains an unconformitybetween the Middle Cambrian Mt. Read Volcanics and the overlying Pioneer Beds.
• The Pioneer Sandstone contains gastropods (snails) and rhynchonellid brachiopod fossils.
• The fossils are of Middle Ordovician age

Geosite Description: The Newall Creek area contains many historic gold workings especially the Harris Reward gold mine (Julen, 1981), the first mine in the area, predating the Mt Lyell copper mines. Workings include pits and shafts which are largely collapsed and partly obscured by the rainforest and part of a historic pack track. The workings exploited lode gold in quartz veins in the Cambrian volcanics plus some alluvial gold weathered from the lodes into gravels and sands. White quartz scattered around the mines is a remnant of the mineralised veins. There are other workings west of the road, but people should venture into these areas only with great care.

The first report on the mine (Twelvetrees, 1900; Collins, 1974) describes two tunnels (24m and 10m long), and two shafts (12m and 11m deep). The shafts were later extended and opened out by the Coronation Gold Mining Company which took over the mine in 1902 but operations apparently ceased during 1905. Production from the mine was at least 1.480 kg Au from 109.6 t of lode quartz. The gold occurs with galena in discontinuous quartz veins which are parallel to the strike and dip of the schistose and  porphyritic country  rock,  and  were  reported to  be  5-12 cm  wide. 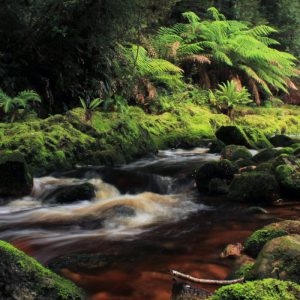