Key facts about this geosite:
• Spectacular vista of surrounding mountains and the township of Queenstown
• The geology of the area is composed of submarine lavas, volcanic ash and sediments which formed on the floor of a shallow sea
• Outstanding water-filled glacial cirque and associated moraine ridges can be found near the summit of Mt Owen
• Extensive faults can be observed along the flank of the ranges in the distance

Geosite Description: Yellowish rocks exposed on the lower slopes in front of you are the Lyell Schists. They are part of the Mount Read Volcanics, a 200 km long belt of rocks that hosts many of western Tasmania’s ore deposits. They were erupted in the Middle Cambrian period, about 500 million years ago, mostly as a thick pile of submarine lavas and volcanic ash and sediments on the floor of a shallow sea. 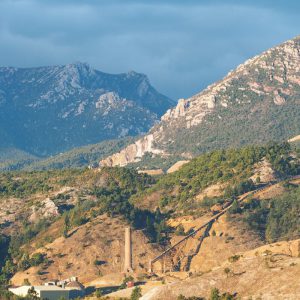